The Gourmet Mushroom Industry we represent 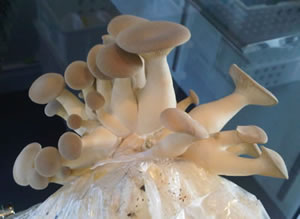 The marketing terms Gourmet / Exotic / Specialty / Medicinal Mushrooms are all synonymous. The international and local markets for these mushrooms continue to grow due to interest in their nutritional and especially health benefits. As fungi, mushrooms have life cycles very different from those of green plants and should therefore be cultivated differently. The choice of species to cultivate depends mainly on the type of growth media (substrate) available and on market considerations including microtrends.

Oyster mushroom species such as the Tree Oyster (Pleurotus ostreatus), Phoenix Oyster (Pleurotus pulmonarius) and Pink Oyster (Pleurotus djamor) are easiest for the beginner. Shiitake (Lentinula edodes) already has earned considerable consumer demand in both fresh and dried form, although more challenging to cultivate when using the modern synthetic / artificial bag cultivation method. Mushroom production, carried out on an entrepreneurial, semi-commercial, commercial or industrial scale, is an efficient and relatively short process - just a few weeks - of turning low value agricultural, forestry or invasive waste into high value mushrooms, which is an excellent source of protein and beneficial micro- and macro-elements.

The evaluation of a mushroom enterprise should include a careful business analysis of the most suitable mushroom species, substrate formulations, climate control options (including temperature, humidity, air flow and light intensity), cultivation procedures and potential markets. The road to success is by getting the important and necessary information from the qualified professionals. Enrol for an Entrepreneurial, Semi- Commercial, Commercial or Industrial Course at the Academy by either the virtual real-time or e-Learning method of training.

Reasons why aspiring and existing mushroom cultivators in Southern and East Africa, and beyond, entrust the South African Gourmet Mushroom Academy®

When using the services of the Academy, you can rest assured that you not only gain the experience garnered from many years of cultivation, but from a strong academic and professional grounding in all aspects of the discipline. Too many service providers in the industry, even today, have blind spots, that they are unaware of, by virtue of only relying on being self-taught.

Adriaan is a well-known international researcher and gourmet mushroom educator who has challenged and changed the way retail groups and customers perceive mushrooms. With perspectives that often contradict conventional mushroom cultivation methodology, he has earned a reputation for straightforward talk, poise and courage. He is regarded worldwide as a passionate advocate of empowerment via education.

Well equipped with post-graduate degrees in mycology, additional business and international mushroom cultivation qualifications (UK and the Netherlands), Adriaan and his team of equally qualified business and marketing professionals is changing the local and international mushroom scenario. Visits and study tours to leading mushroom research centres and private companies in the Netherlands, Germany, France, Spain, Sweden, Switzerland, Ukraine, England, Scotland, Canada, United States of America, China (which produces more than 80% of the world’s gourmet mushrooms) and Hong Kong sculptured his vision of this global US$34 billion mushroom industry. Cumulative practical experience over a 30 year period is used to educate entrepreneurs from all spheres of life, background or ethnicity.

Apart from being honored with the prestigious Scientist of the Year Award, Adriaan has been involved in teaching and research into various aspects of gourmet and medicinal mushroom science, with the emphasis on cultivation technique evaluations (simple and / or state-of-the-art), indigenous substrate formulations and the development of mushroom-based nutraceuticals / dietary supplements e.g. health wines. Adriaan was appointed as honorary lecturer at the South African Gourmet Mushroom Academy® during Jan 2005 and as managing director in Apr 2007. He was selected as one of four National Finalists in the FNB Enablis Business LaunchPad Competition, an achievement which reflects a high level of entrepreneur potential and commitment.

From a mushroom cultivation perspective, the ground-breaking Microsoft® Excel-based Mushroom Business Plan and Operational Management Design System© and Mushroom Substrate Design Calculator© software are now available as part of two special combo (combination) deals or as one trio deal. Together with the new Mushroom Business Design Guide© with co-author Markus Peter-Erik Janssens in e-Book format, it will explain the value of the calculator with examples and substrate formulations applicable to various mushroom species and also the step-by-step interpretation of the operational management design system to operate at optimum levels for maximum profitability.

Other than his scientific and business acumen, Adriaan and his team’s mushroom endeavours and those of their learners have been featured in both national and international publications / magazines, e.g. the Netherlands-based Mushroom Business www.mushroombusiness.com as well as being the focus of television and radio interviews, blogs and newspaper articles.